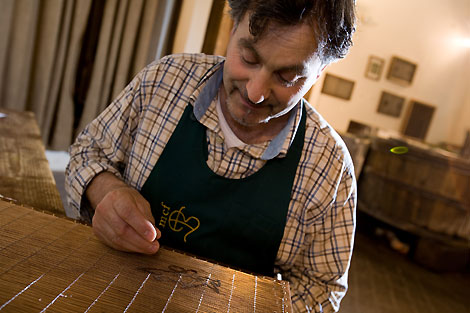 Watermarks dated back to XV° and XVI° centuryTowards the end of the 1200's the craftsmen active in Fabriano were in the habit of countersigning their production with watermarks. Today watermarks represent an important testimony to the perfection attained by the Fabriano paper mills in this sector, in particular for the production of value paper. The realization of a watermark with extensive lightface detail begins with the preparation of the punch to transfer the image by 'projecting' it on the watermark screen. It is almost certain that the first punches were prepared, in the mid 19th Century, by sculpting the image in "positive" on a surface of a hard wood slab (walnut, cherry and box-wood trees). The punch thus prepared in this manner and then a bronze sheet previously 'annealed' is placed on top of the punch and carefully 'forging' the two elements with the appropriate forge hammer and felt cushion, the image is then reproduced on the bronze sheet. From the fusion of bronze sculptures in the second half of the 1800's witnessed the "lost-wax" technique. This particular technique consists in the incision of a wax sheet against light. The engraver removed the wax with the appropriate engraving tools a, creating surfaces or tracks more or less elevated thereby determining the even the finest shades that compose the image. Once the incision process was complete, the wax sheet was then uniformly covered with a subtle layer of refractory earth forming the so called "plastering" process. 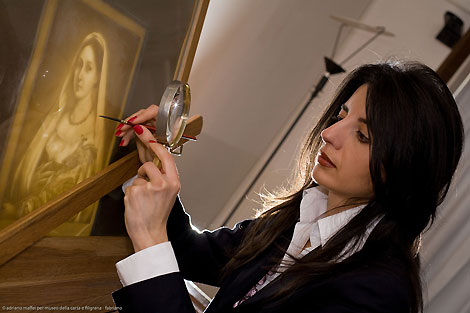 Exposed to a temperature of little more than fusion, the wax liquefies and exits from the covering via one or more perforations in the plaster. All this causing a reinforced bronze casting that once cooled constitutes the punch (upper die) to transfer the image to the screen. The same period also witnessed the preparation of the punch for fusion using a chalk "cast" on the incised wax; this process prepares the fusion to obtain the first bronze "punch". Preparing a second chalk cast and using the same process achieved the "ram-coin dimpling". In this case though instead of the sheet being forged, the sheet is compressed between the punch and the ram-coin dimpling using an appropriate press the image is then transferred to the screen. The first years of the 20th Century, the technique of preparing the punches used the electrochemical process of galvanoplastic. From the wax original, via a galvanic bath, a negative and a positive copper sheet are produced, which in turn, serve to transfer via pressure the image on a metal screen. At this point the screen is sewn on to other screens which acts as a support and reinforcement and is ready for the final phase which coincides with hand-made paper. The Miliani Paper Mills also produce watermarked paper using a cylinder paper machine and a paper machine. The paper machine uses a "dandy roller" to obtain watermarks, or watermark bodkins for impressed watermarks.