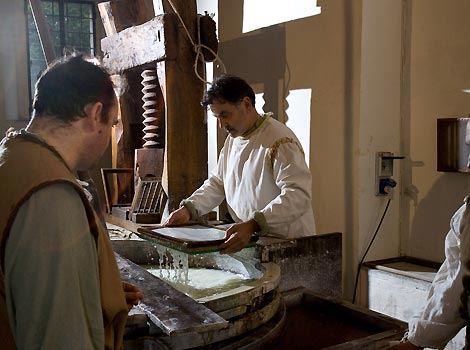 The sheet of paper is the result of the feltration process, in a watery utensil, of refined vegetable fibres. The “feltration” process is the union of refined fibres in order to form a even surface: the "sheet". The hand-making paper process takes place in the “vat”. The “worker”, repeats the same movements as the Fabrianese paper makers did in the 13th Century, immerging the “screen” in the vat and extracting each time the same quantity of paste to distribute over the whole surface of the screen. The screen is the means by which the feltration of the fibres occurs. It is made up of small bronze rods distanced to each other by a few millimetres, and held in place by “chains” or “plaits”. The prepared screen is then mounted on a rectangular wooden frame. The surface is enclosed by a wooden cornice known as a “deckle”, which is not fixed but propped on the screen’s perimeter to allow the paste to limit the dimensions of the sheet. As soon as the sheet is formed, the worker passes the form to the "coucher”, who once having let the water drip for a moment, places the form on a woollen felt allowing the separation of the sheet from the screen. One sheet and one felt on top of each other forming a pile or “post” that is then pressed in the screw press, obtaining the first dehydration phase of the sheets. This operation reduces the water content by about 50%, allowing the separation of the sheets from the felts. The separation is carried out by three paper makers : the “felt remover” that removes the upper felt and places on the felt pile that the “coucher” will use in the next round of paper sheets from the vat. Then the “layer” or the “sheet layer”, using the “pinch” technique separates the sheet from the lower felt and assisted by the “holder” places it on the moist sheets pile known as “postone” that is then subjected to a second pressing prior to be singularly exposed to the natural ventilation system by distributing them on lawn or hanging them on hemp cords in an appropriate room, known as the "stenditoio" or the "stendaggio", with large windows that permit the flow of air currents. The paper produced by the vat must be “surface-sized” in order to be used as writing material, that is it must be rendered blot proof against writing inks. The paper sheets are immersed in an “animal gelatine” bath made up of "carniccio" animal remains discarded by local tanneries. This treatment permits the sheet of paper to be sized at high quality and also a higher grade of compactness. The “carniccio”, washed with care, is loaded into the boiler barrel with tepid water. It is then heated gradually until it reaches a temperature of 90°C. In the meantime the gelatine becomes soluble in the hot water. The basket is left immersed until all the gelatine has been extracted from the “carniccio” leaving a “broth”. At this point the basket, containing the animal mucilage, is lifted via the appropriate winch to be replaced with new substance. After some hours of rest, to allow the eventual impurities to settle, the gelatine “broth” is transferred to the boiling pot and filtered via a hemp sieve containing kalinite to 1% of dry gelatine weight. The kalinite has a double action of clearing the broth and increasing the gelatine’s adhesion qualities.