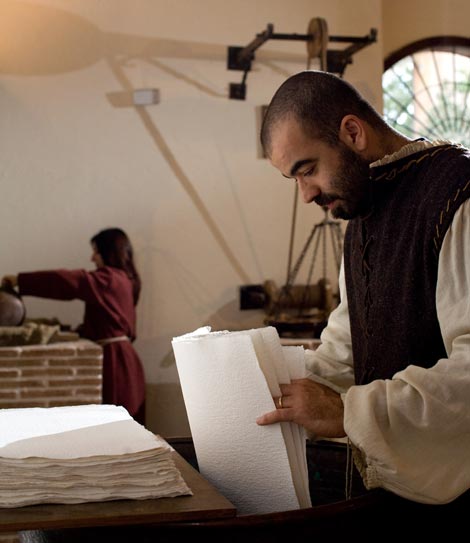 The operation of sheet sizing is carried out in the "secchia del collaro" sizing vat. The necessary quantity of gelatine is transferred to the vat from the boiler : diluted with water, it is then heated to a temperature of 40° C approximately. The sizing vat rests on a solid tripod on which a fire is lit to heat the gelatine mass. The “collaro” the paper maker that performs the sizing, removes a “mazzetta" (small stack) of 5 to 10 sheets according to its weight (basic weight) and manoeuvres it in such a way as to separate the sheets from one another, then quickly immerging them in the sizing bath ensuring that all the sheets are abundantly impregnated with the gelatine and then removes them and places them on the surface of the screw press "presa a collare". With the pressing action, the gelatine distributes uniformly within the sheets eliminating the excess quantity that drips into wooden buckets, placed on the sides of the press. The pressing must be carried out with care, gradually increasing the pressure and completing the operation within a few minutes. Once removed from the press, the sheets are taken to dry in the open “prato” or on hanging ropes, separating them in order to prevent them sticking to each other. As soon as the sheets are dry but not dried up, they are collated and placed on “cargo” that is stacked and placed under pressure by weights. Remaining thus for a number of days while waiting for the “apparecchiatura “ operations meaning the whole of the finishing operations or the preparation with which the paper is ready for common use. In the period in question these operations were performed only rarely in the fulling mill which were located outside the city walls, along the water route. 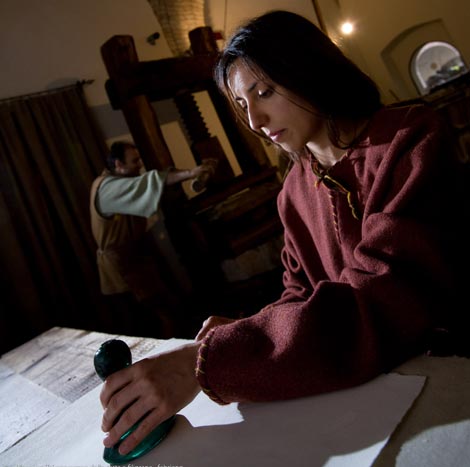 Generally this was performed by the "Chamboreri" or the "Cialandratori" (paper grinders/smoothers) which were independent operators operating in their "Chambore" situated in the urban city centre within the city walls. The first operation performed in the "chambora" is the "lisciatura" (smoothing / flattening) which aimed at smoothing the two surfaces of the sheet of paper in order to eliminate the coarseness acquired in the production process. This consisted of placing the sheets, one at a time, on an appropriate table upholstered in ram leather in order to amortize the pressure exercised manually using the "cialandro" smoothing implement. Hence the name “cialandratura” (smoothing process). The “cialandro” smoothing implement was a block of flint, pebble, agate or glass stone, in the form of a conical trunk with a flattened base and the upper part easily hand gripped.“cialandro” (smoothing element) The paper surface, subjected to the rubbing motion by the “cialandro” (smoothing element), became smooth and slippery to touch, favourable characteristics for good quality ink writing. Following the smoothing process was the selection process whereby torn or defective sheets due to holes, puckering, folds, water drops or other defects were placed aside and these then constituted the retree paper. During the selection some sheets were rendered suitable that for their minor defects would have passed the discard selection. For example, the removal of fibrous groups or strange bodies like wooden splints is carried out with an appropriate tool which restores the continuity of the sheet’s surface by rubbing the treated area with a “brunitore d'agata” or “dente di porco” specific tools for this process. The sheets resulting as good quality were then counted, folded and quinterned into 25 sheets and once wrapped each 20 quinternions formed a ream of 500 sheets. The reams, pack wrapped with paper made from the discarded rags, were then shipped to clients or stock piled in a cool and dry room where the paper could season.