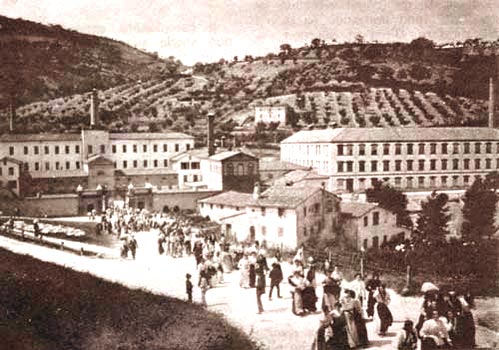 The last fifty year period coinciding with the fall of Fascism has undoubtedly been the most difficult period in the life of the Cartiere Miliani (Miliani Paper Mill). The pandemonium that enveloped Italy, the German Occupation from September 1943 to July 1944, the bombardments that did not spare the buildings of Fabriano. Notwithstanding this situation of uncertainty, danger and instability the two Fabriano plants – central and subdivision, together with the Pioraco and Castelraimondo continued their production even if constrained by reduced hours and frequent stoppages. This situation permitted the workers to supervise the machinery and equipment, notifying the clandestine authorities of the local CLN the intentions and plans of dismantling or destruction of the machinery by the German Troops. The commitment of the administration and supervisors – who stood by their workers even in reduced productivity – avoided plant and machinery transfer or destruction. All this is possible only within certain limits, as for example it would have been easy for the German troops to “blow up” the Castelraimondo Plant, or the hydroelectric centres in S.Vittore di Genga and S.Sebastiano di Pioraco all before retiring ! The influential role of the presence of the paper mill workers is only fully realized soon after the day of Liberation (13 July 1994). The noticeable sparing of the destruction by German troops or air bombings allows – in a limited space - the ability to pick up production, ensuring satisfaction to the urgent requirements by the State, inundated with the huge problem of country’s material and political reconstruction. The same courage and determination that spirited them on during the brief but intense Resistance, the skilful effort translates into a responsible commitment to reactivate the plant machinery and equipment, repairing war damage, in a time when all was impossible the supply of machine parts to replace the damaged ones. It was this collective effort that as the primary condition to guarantee the continuance of the Cartiere Miliani (Miliani Paper Mill) activity and hence its continued existence, after a period which completely ruined many other important productive structures.