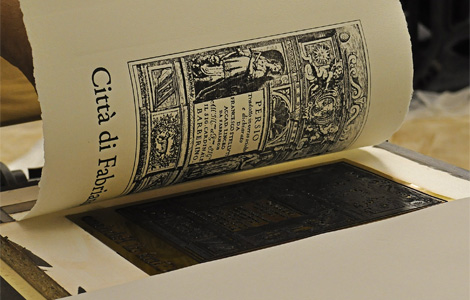 Paper and Printing still are key elements for the transmission of knowledge. Without the technological innovations introduced by Fabriano's master papermakers during the thirteenth century, which led to the birth of Western Paper, printing in Europe surely would come much later. The wide availability of durable high quality paper, in fact, led to a gradual overcoming of vellum and to the needing of a faster method for transcription of documents reserved to a very limited group of users. Johann Genfleisch von Gutenberg, a goldsmith born in Mainz at the end of XIV Century, on February 23, 1455 succeeded in squaring the circle after years of attempts by developing the technique of printing with movable type, and, above all, by inventing the printing press that allowed him, in just three years of working, to make 180 copies of the famous 42-line Bible, in practice the same time taken by a scribe to make a single copy.

The Museum of Paper and Watermark (MCF), with the new printing section celebrate the meeting of these two excellences and the path along which together have made the most significant milestones in the history of written communication. The new section of the museum, set up inside the impressive monumental complex of Saint Benedict, is home to a valuable series of presses and printing machines, mostly from the Museum of Paper and Printing formerly SIVA (National Pulp and Paper Institution) in Rome. The machines on display including some donated by the families Ciambricco of Fabriano and Brambilla of Milan, have been restored and made working by Antonio Scaccabarozzi, Vice President of the Italian Association of Museums of Printing and Paper (AIMSC).

The visit of the new section, included in the normal ticket of admission to the Museum of Paper and Watermark, will allow visitors to retrace the milestones in the history of printing. The new section of MCF offers, in fact, further investigation on the various evolutionary stages of the printing process and among them the introduction, in 1798, of lithography due to the genius OF Aloys Senefelder, a technique still widely in use. The museum project has been made by James Clough, a member of the Italian Calligraphy Association and professor of  lettering, theory and history of typography at the Polytechnic University of Milan, the ISIA of Urbino and University of Lugano.

The preparation of the first part of the "Civiltà della Scrittura" Section was carried out with the contribution of: Fondazione CARIVERONA.