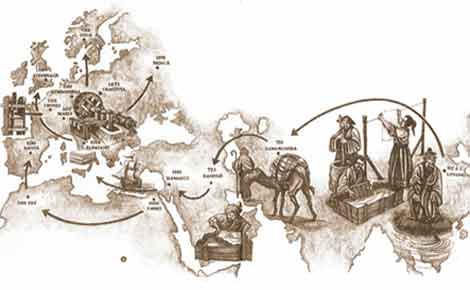 One of the first descriptions in the Italian language on the ability of the Chinese to make paper is supplied by Marco Polo in a passage of his 'Milione'. He mentions the material with which value paper is manufactured referring to the particular quality of vegetable fibre used in those times: rise or tea straw, bamboo canes and hemp rag cloth. Narrating that the Chinese emperors jealously guards this particular technique, which only in the 7th Century became diffused, firstly in Korea then in Japan and finally in central Asia in Samaria, where the Arabs learn directly from the Chinese in order to introduce this art in the Middle East and in the Mediterranean. Paper then made its way into Europe and Fabriano. It is almost certain that the Arabs were the primitive teachers of the Fabrianese papermakers and that the linen and hemp were the same raw materials used in Fabriano to manufacture paper. The innovative techniques introduced and perfected by the Fabrianese conclusively influence its resistance to time, pathogenus agents and the quality of paper, that slowly became the most diffused writing material available and more convenient as it was cheaper than parchment and other materials used prior to the invention of paper. With the new technique of printing on paper, in the second half of the 15th Century, paper takes on the responsibility as instrument and irreplaceable medium for the diffusion of culture and information. Thanks to the innovations made by the Fabrianese master paper makers, paper affirms itself as the only material with which humanity entrusts the written work to communicate and bequeath its thoughts and ingenious works.