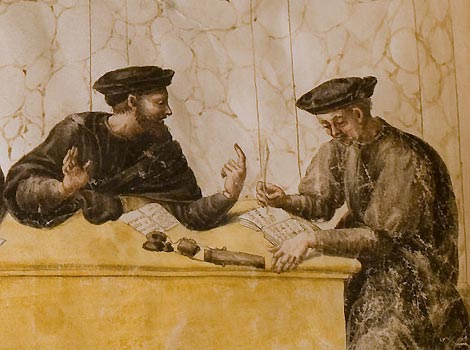 Information documented relative to the 12th, 13th and 14th Centuries, preserved at the “Archivio Storico Comunale di Fabriano” (the Fabriano Council Historical Archives), permits the partial and fragmentary reconstruction of the beginnings and evolution of Fabriano as the centre of papermaking in the Marche region. According to these archives, the paper-makers corporation did not count amongst the twelve artisan corporations that governed the Council and that were listed in the public act of 1278 in Fabriano. Among the twelve the two majors that emerge due to power and dimensions as institutionalised political-economic organizations, ascended to Council power, are those of the merchants and wool producers. The art of wool making preserved in the statutes of 1369 in the historical Fabriano archives reunites, from the 13th Century, artisans and personnel specialized in wool carding, weaving and dyeing with a complete cycle from the raw material to the commercialisation of the finished product. Not only did the wool makers possess an official building but also a building for the “purging” of cloth and a number of rooms equipped for the operation of the (gualcherie or gualchiere) “fulling mill”. The art of wool making may perhaps consider itself the precursor to the initiation of paper-making, a hypothesis confirmed by the papermakers corporation becoming official in 1326 even if only in 1283 the acts of the notary Berretta notes the names of certain Fabriano papermakers. Therefore it may be assumed that these artisans, not yet reunited in an autonomous corporation, operated in the development and experimental phase of a sector promoted and belonging, at the beginning at least, to the same wool craft via common interests and connections. The specification of the "gualchiera a cincis" or more simply the "valchiera" became the more popular term to indicate the small wool mill situated on the Castellano (today known as the Giano) river bank, which was predisposed for processing bamboo paper. The creative talents of the first papermakers favoured a rapid growth of both quality and quantity of paper production and perfected the rudimentary techniques in Fabriano in order to become in a few decades the cradle of paper handicraft in Europe. However the first stepping-stone of this very important development process of the beginning of papermaking in the inland Apennine Marche territory is unfortunately missing in the historical archives. Also because it was favoured by the flourishing manufacture of woollen cloth that with their diverse workmanship phases (some of which like the fulling carried out by the “hammers” operated by water wheels) may have suggested the use of the multiple hammer hydraulic hammer mill to pound the rag cloths, making the sludge for the paper paste, eliminated the stone mortar and the wooden piston operated by hand which was used by the Arabs. To also eliminate the inconvenience of easy deterioration of the sheets due to wheat-starch sizing (being the main reason for avoiding the use of paper for public clerk or notary acts) the Fabriano paper-makers substituted the starch substances with gelatine or animal sizing extracted from the discarded meat of the local tanners. Other important innovations attributed to the Fabriano paper-makers is the perfectioning of the screens used by the workers and paper watermarks that, observed against the light reveal the famous signs initially used to reproduce the trademarks of the diverse paper makers; a necessary distinction already practiced by the wool makers that impressed manufacturing “marks” on their products where the prototypes were deposited in the appropriate corporation registers. The signs (or marks) initially were quite simple and were formed by two letters “I” and “O” from the alphabet, two externally tangent circles, two concentric circles, lines in crosses ended by circles. Within a few years the design was perfected and refined taking on diverse and elegant forms, nurtured by the artisan’s creativity. In the 13th Century the more recurrent signs were: the griffon, flowers, mountain, hat, lion, stork, horse, bell, billy goat or beak, half buck, scales, pomegranate, angel, axe, lily, dragon, pitchfork, eagle, Saint John, sword, half moon and stars. The gathering of the “precious” raw material at the beginning of the paper process consists of rag lots that the merchants conveyed to Fabriano from the nearby centres, but also from Fano, Florence, and Perugia. The rag cloths generally were divided into groups “good”, “big”, “ribbed”, “decorated” and “schuoso”; after the weighing they were transported to the mills where the “cloth workman (ragman)” saw to the “shaking”, “assortment” and “selection”. The use of the lime led to the idea that the process followed with the maceration and beating process, via the multiple hammer hammer-mill, completing the transformation of the rag-cloth to paste. In the “breaking down” mill the paste is then transformed into sheets of paper by the paper maker assisted by the coucher, while other workers involved in the paper making process saw to the smashing, hanging and sizing and again to the hanging (drying procedure). The next operations such as glazing, folding and stacking are performed by the cialandratori (comes from the name of the utensil “cialandra” used to smooth the paper) which, in their workshops within the city walls, saw to the “polishing” of the sheets and then collated them into reams, ready for shipment, then into packages wrapped by coarse (packing) paper and heavy cloth sheeting against inconveniences and risks encountered during their transport. The types of paper more commonly in use in the 14th and 15th Century were: miglioramento, costoloni (rib), fioretto, fiorettone, "da sogellare"; the sheet format was denoted with the terms piccolo (small), fino (fine), piano (flat), tondo (circular), reale (regal), grande (grand) and imperiale (imperial). From the seven bookkeeping registers of the merchant Lodovico di Ambrogio di Bonaventura, it is possible to ascertain the prices of the various formats: the “miglioramento” paper was estimated from 30 to 34 bolognini (currency used in that period) per ream; the “costoluni” paper 25 bolognini per ream; naturally for lower quality paper for the protection of the higher quality the prices varied between 3 to 7 libbre and 5 bolognini per ream.