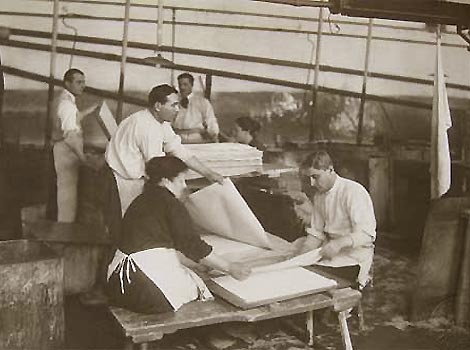 The recommencement of the paper industry in Fabriano is attributed to Pietro Miliani (1744-1817) who, as a modest employee, firstly became 'creator' and then owner of the paper mill. The Miliani Paper Mill was founded by Pietro Miliani in 1782 in association with Antonio Vallemani, a noble Fabrianese, and almost immediately attained a high degree of plant equipment and commercial developments due mainly to the entrepreneurial attributes of Pietro Miliani, whose tenacity and commitment aimed at the improvement of product quality (printing, writing, art and incision paper), confronting enormous expenses for renovating the mill's plant equipment and using the most modern technically researched techniques for paper manufacturing. It was Pietro Miliani's direct involvement as an experienced 'paper maker' that consented, after repeated trials to produce in 1796 - unique in all the Pontifical State - tissue paper, esteemed for printing and particularly suitable for design and incision, highly prized by famous printers and artists of the era, among which Bodoni, Rosaspina, Monghen. (Also the great Aldo Manuzio, at the beginning of the 16th Century used Fabriano paper). The modifications made to the forms for the manufacturing of this special type of paper are to be attributed to the Miliani family, innovations that successively became applied in all Europe. Once Pietro Miliani attained the affirmation of the Fabriano product and had re-conquered the Italian and abroad markets, he then rented the Mariotti di Fabriano paper mill and the Bezzi di Pioraco paper mill; which by then he was also able to buy out Vallemani and purchase the Serafini paper mill, hoping as a genuine precursor to constitute a single industrial complex join up with the small businesses operating in his city, emerging as a famed paper maker and the biggest in volume paper manufacturing. An intelligent and ambitious design which is eventually realized by his descendants Giuseppe and Giambattista . There were five paper mills in operation, at the time ( 1782 ) when Pietro Miliani stipulated the convention of the association with Vallemani for the management of the paper mill, which are then absorbed by the Miliani family in the course of the 19th Century. The CARTIERA MARIOTTI paper mill - Rented by Miliani in 1791 and then acquired in 1887 which is connected to the Vallemani - Miliani paper mill via a bridge. The CARTIERA SORDINI paper mill - Mentioned towards the end of the 18th Century, is probably absorbed by another paper mill leaving no traceable evidence. The CARTIERA CAMPIONI paper mill - Results in full activity in 1824 with 13 workers and three young workers, producing about 53,000 pounds of paper for export out of the Pontifical State. Then in 1836 with only 12 workers and working with two vats, one cylinder and an eight hammers fulling mill is rented by Miliani and then acquired in 1854 and successively transformed by Giambattista Miliani into commission housing apartments, rented out for modest rent to employees. The CARTIERA FORNARI paper mill - Second in importance to the "Miliani Paper Mill", and the only one to resist to the competition until 1902, when it is acquired by Giambattista Miliani. In 1824 the mill employs 29 workers including 9 young workers and produces 71,000 pounds of paper of which half is exported.