Home The Chiavelli, lords of Fabriano

The Chiavelli, lords of Fabriano 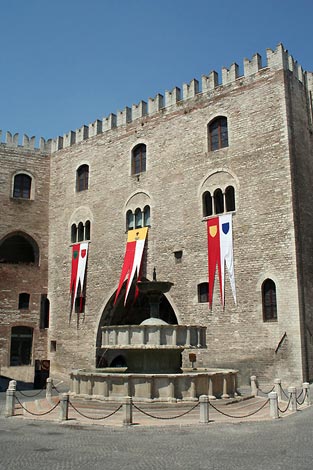 The Chiavelli dominion asserted itself in Fabriano from 1378 to 1435. The historic feudal family became key subjects of Fabriano during the formation of the liberated Council, ensuring economic stability to their powerful family represented by Guido Napoletano, who conquered the city’s government after depriving the economic and political power of the authority of the city’s arts. His introduction in the entrepreneurial and financial world goes from the control of local manufacturing and production activities to the trading of paper, an activity prevalently carried out by the then middle-class artisans and merchants. In fact the certain profits that were derived from paper art induced the Chiavelli family to increase the development of the paper industry with the purchase of fulling-mills (gualchiere) from small manufacturers eliminated by the competition, and give life to commercial companies by committing large sums of capital. The importance and fame attained by paper the main product of Fabriano are found even in the Council Statute of 1436 that, for understandable motives of “public utility”, prohibited anyone from erecting within a radius of 50 miles from Fabriano buildings for paper manufacturing and the teaching of the paper making secrets to those not residing within the Council territory, pending a fine of 50 ducats. A few years later the prohibition was re-confirmed with higher penalties for transgressors, whom were threatened with being considered as “rebels” and thereby banned from the city with consequent capital confiscation. The care with which the local tribunal protected its local craft and secrets is highlighted in a document from 1445, when the Council priors, concerned that the eventual death of the maestro Piero di Stefano, the only artisan who practiced the “modular” art in the Marche province, would also terminate his profession, extorted a promise from the old maestro to teach the craft to his son or any apprentice in his workshop and not to construct or repair screens used outside the district of Fabriano or he would be penalised with a fine of 100 ducats. The craftsman specialised in wooden screens – known as “modularo” – is a professional figure of particular importance for the manufacture of handmade paper sheets. The instrument or utensil that is fashioned by these hands – known as a form (screen) or module – is made-up of a wooden framework, on which a dense wire mesh is placed and also a movable wooden frame or deckle. It must be constructed in order that once it is immersed into the tub by the worker to extract the paper paste, it may support the load of water and fibre during the feltration phase without experiencing deformations.